Most know that the Roadtrek fuse box containing the fuses and circuit breakers for the Roadtrek RV appliances and components is on the wall of the Roadtrek next to the passenger side door into the Roadtrek. This is where you will find the main 30 amp circuit breaker for the coach, the breakers for various other 110/120 volt electrical components like the air conditioner, the television, etc.. Also in this box on the wall are all of the fuses for the 12volt components  of the Roadtrek such as the hot water heater, the furnace, the water pump, the lights, etc..  In the photo below it is the large black panel below the generator switch, the hot water heater switch and the monitor panel with the battery disconnect switch, the test switch, and the water pump switch.  You open this panel by pulling up on indentation in the center, pulling toward you and out.  On the back of that panel is a diagram that shows what circuit breaker and which fuse goes to what. (Some Roadtreks do not have that diagram. It is in the manuals of some Roadtreks and apparently in most recent Chevy Roadtreks it was not put into the manuals (why is a good question).) 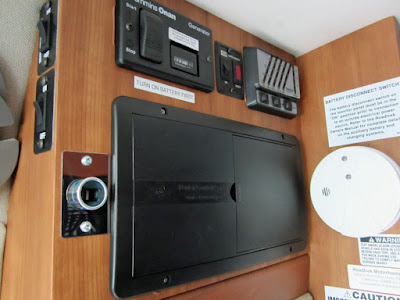 There are two fuse boxes that have the fuses for the Chevy. One is in the engine compartment. The second fuse box is hidden. The hidden fuse box is under the driver's seat. If this were just a Chevy Express van it would not be hard to find and get to that fuse box, but when Roadtrek removed the stock Chevy seats, installed swivel mechanisms under them to allow them to swivel around to be lounge seats for the Roadtrek, and then put in Roadtrek's own front passenger and driver's seat, accessing the hidden fuse box becomes a mystery. Like some other parts of the Roadtrek it is a puzzle that is a challenge to solve.

We have solved that puzzle for you and will give you the steps for you, too, to be able to get to and into that hidden fuse box.  Some Roadtrek manuals will tell you that to get to the fuse box all you have to do is turn the driver's seat counterclockwise. That sounds very simple, but it is not quite that simple.

HOW TO GET TO THE HIDDEN FUSE BOX:

1) Put the back of the driver's seat straight up. Pull the large handle on the right side of the bottom of the seat.

3) Using the bar below the front of the seat cushion, move the seat about half way back on the slide so that it is in the position the seat is in the photo below. You can be sitting in the driver's seat of you can be standing outside the open driver's door, just pull up on that bar and slide the seat to where it needs to be. 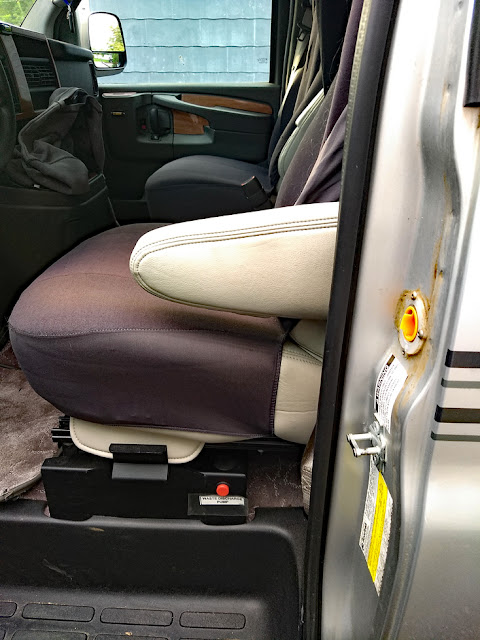 4)  Look again at the photo above.  Leave the armrest down. The black handle in the center below the side of the seat facing you looking from the open door inside is the handle that swivels the seat. This handle is on a spring and also is connected to a latch that locks the seat in place so that it will not swivel while you are driving. With one hand or two, pull that handle UP. You will hear the latch unlatch and you will be able to now swivel the seat COUNTERCLOCKWISE -  do that the front of the seat comes toward you.  If it gets stuck on the curtains that hang down from behind the door post, just move the curtains.  Below you see the front of  seat facing you! 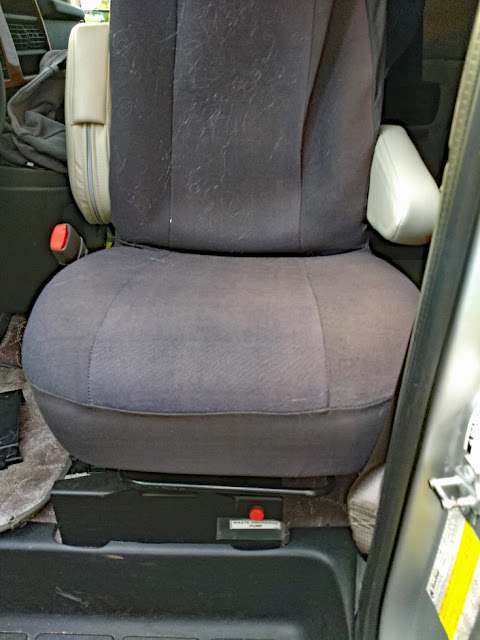 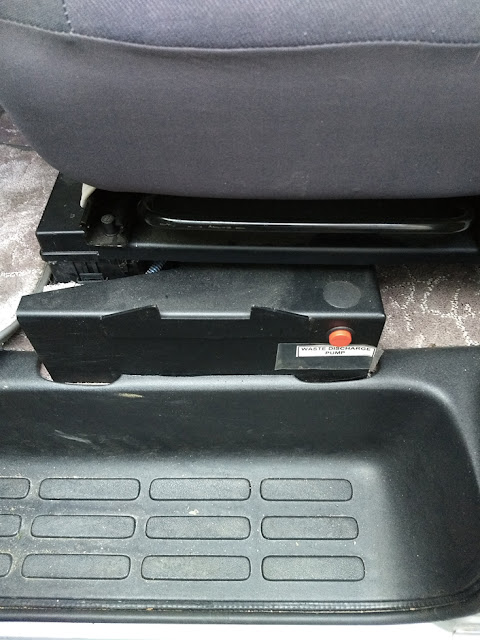 5) In the photo above you can see the slide handle for the seat right below the seat cushion. With one hand pull that handle up and with the other hand push the seat back as far as it goes on its slide. Let go of the handle and the seat locks into that position.  If you look to the left on the floor at the black box on the floor - YOU HAVE REVEALED THE HIDDEN FUSE BOX!

6) The box cover has two clips that keep it closed. They are on the sides at the top - on facing the driver's door and the other facing the passenger side.  Reach in under the seat and  feel for them. It is a simple move and release clip. They are hard to see and it was not possible to photograph them in place. Release each clip and the cover will come right off. Putting it back on is just as easy. line up the edge of the cover with the front of the box and put it on top and it just gently pushes down and clips into place. 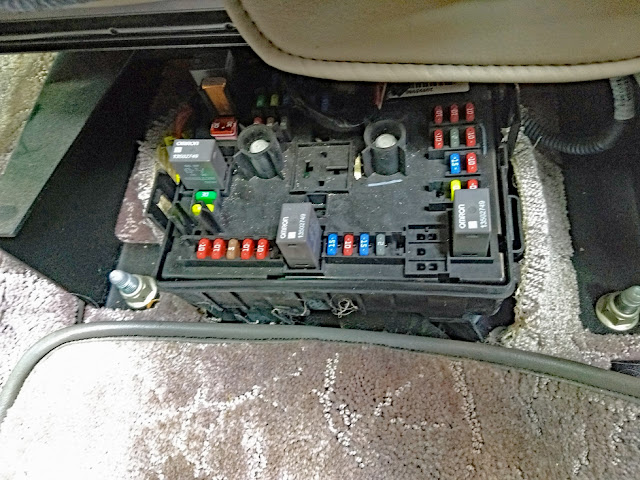 7) The photo above is the extent of what you can see in the hidden fuse box. You pretty much have to reach in from the open driver's door getting your head and eyes around to see the inside of the fuse box from the floor below the steering wheel.  It is far from convenient and very awkward.  There is some reaching and eye straining to see and get the the fuses further back in the box. The Chevy Express owners manual will identify what each of the fuses in the box are. There is NO chart on the cover of the box.  There are also no labels other than the amps on each fuse. These are "MINI FUSES". There are also what the manual calls "J CASE FUSES". These are You should be able to find them in any auto parts store. These are smaller than the fuses that are in the "Roadtrek side" fuse box. There are also 6 relays and 2 circuit breakers. One of the circuit breakers is for the power seats and the other circuit breaker is for the power windows. Some fuse spaces are left empty.

8) To put it all back together again just reverse the steps.  Use the slide handle to pull the seat back to where you started in Step 3. When the set is swiveled it will continue to swivel until it is facing front to the steering wheel again. To do that all you have to do is swivel the seat back to the front without pulling up on the swivel handle again. The seat will lock in facing the steering wheel. Move the seat forward or back to where you like it when you drive. That is it!

If you do not have a Chevy Express Manual for your year Chevy Express van - and remember that the Chevy Express is not always the same year as your Roadtrek is, so you go by the Chevy year and not the Roadtrek year as far as the Chevy Express manual is - there are a several websites that have manuals for all cars and vans of various years and they will let you download the manual for free. It is a good idea if you only have a downloaded manual to put the PDF file for the manual in your smart phone or other device you have with you on trips.

So now you too can find the hidden fuse box and get to it whenever you need it. Let's hope you never have to get to it. 😃