For a long time I have been looking for some type of lubricant that will make the 30 amp power plugs and sockets come apart easier in the winter. The problem comes more from the plug and socket on the 30 amp RV extension cord than the Roadtrek plug on its power cord, but that has been a problem too.

When I hook up at my home in the winter to charge the batteries, I plug a 30 amp female to 15 amp male adapter into the socket of a 30 amp RV extension cord. The extension cord socket is plugged into the plug of my Surge Guard power protection unit and than then the Roadtrek power cord plug is plugged into the socket on the Surge Guard unit. Between the plugs and sockets I put Plug Dogs. (See my Plug Dog article.) This is done twice a month to keep my batteries charged.

In the summer months when it is time to put all of this away, the plugs and sockets pull apart with only a small amount of resistance. In the cold, it can be a real struggle to pull apart. The plugs stick in the sockets. Even with the Plug Dogs it can take a real heavy yank to get them apart - and there have been some days that some just do not come apart at all. So far, that has not been the power cord of the Roadtrek - and I can get that free with some effort and put the rest in the house and let them warm up enough to come apart. The socket on the 30/15 adapter can be very hard to come apart and I have had to pry that apart even after it has warmed. My concern all along has been if the Roadtrek power plug will not come out of the socket. I have thought that there must be something to use to prevent this.

I have asked on various forums and RV groups. I have been told dielectric grease will work for this by some, while others have said don't use dielectric grease. I have contacted two companies that make dielectric grease and have told that their product is not for this purpose. Yet, some have said it works with no problem. Some said just petroleum jelly. Others said WD-40. Others said never use anything petroleum based on electrical connections. I was about to either give up or take a chance when I found a product made by a well known RV supplies company that is made exactly for this purpose.

It is called Camco Power Grip Electrical Protectant and Lube - the lube part is what I want. Camco makes the RV 30 amp extension cord that I use. It has a big plug and socket each with a solid pull handle on them - "Power Grip" handles  - and this is "Power Grip" lube. The package and product description says that this is to lube the plug to come easily out of the socket (when you want it to). Other benefits are to protect from oxidation and to improve conductivity. It is for use with "all electrical adapters". It is made of a silicone grease mixture. No petroleum.  This may very well be dielectric grease - but it is not labeled as that.

I took a cotton swab and squeezed a small lump of grease unto the tip. A toothpick or a popsicle stick would work just as well. The label cautions about getting this on your skin, so while my inclination would have been to just put a dab on my finger and apply it, I was not going to ignore the warning. I took the swab and lightly coated the blades of the plugs including the ground post with the grease - each just before inserting it into the socket. I inserted the Plug Dogs where there were no plug/socket pull handles as I usually do. The plugs slipped easily into the sockets. When it is cold these take some effort to push them together - it was in the 20's degrees F while I tried the Lube. All lubed and connected. The 15 amp plug was plugged into the outdoor 20 amp socket on the house and power flowed. (The 15 amp plug was not coated - it never has been a problem pulling it out of the house outlet socket.)

I let the batteries charge for 24 hours. The next day was colder and snow was expected later in the afternoon. Without the lube I would have been very concerned about getting this all apart in this cold. I pulled the 15 amp plug out of the house outlet and proceeded to pull the plugs from the sockets. The one that has always been the hardest is the adapter socket from the extension cord plug and it came right apart. Great! Each plug pulled easily from the sockets. This stuff WORKS!

When the plug with the lube on the blades goes into the socket it is putting lube on the socket as well. I plan to put it on the next time I plug in as well. We will see how often it needs to be repeated. There are two more winter months to deal with and I don't want to find out the hard way that it needs to go on every time.

This product is NOT CHEAP. A ONE ounce tube cost me just under ten dollars on Amazon from a third party vendor. There were several vendors - some charging shipping and some not. I chose one that was about thirty cents higher in price than the lowest priced vendor offering free shipping because this vendor had a much quicker estimated delivery date than the lowest priced vendor. It was shipped the next morning and arrived three days later. Since this was coming halfway across the country that was pretty good!

If you have any problem with getting power plugs out of sockets, this works. It is Camco Electrical Protectant and Lube and its product number from Camco is #55013. 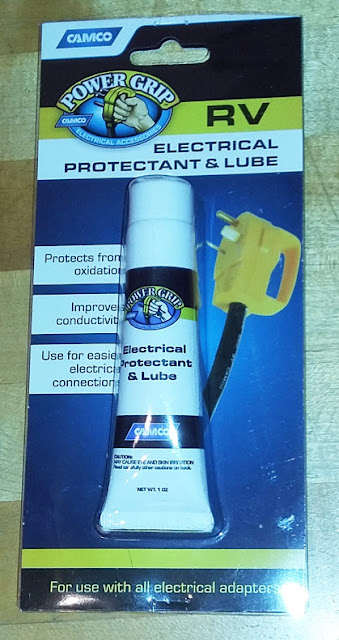