SEAT COVERS FOR A ROADTREK

In a recently past article - which seems so long ago - I wrote about a problem we were discovering with the "leather" seat covers on the seats in our Roadtrek. I had indicated then that I had found a glue that worked - fairly well to seal the small tears that we were finding. Well, not long after we found more areas in which the outer surface of the seat was peeling - and there were just too many to try to use the glue on without it looking terrible. We had to find something to cover these seats with.

As I had said then our looking at car/truck seat covers in the local auto stores and Walmart just did not seem that they would fit and work. I went back to the Internet and asked for help on a recently new Facebook Group specifically for Chevy Roadtreks.  There two members shared with me that they had found seat covers in Walmart that did fit - fairly well. With that we went out to Walmart to see if we could find these covers. Of course, when looking for something that was purchased years back it is not always possible to find the same "models'. We did find one of the same brands and bought two different sets to try. We also bought a seat and backrest pad to try as well - in case the covers that are available now did not work.

We purchased two different sets of "Dickie's" seat covers (a subsidiary of Kraco). One was sized for trucks and was a thicker fabric. It also had a side zipper for just one arm rest. The other was a thinner cover that was a "universal" fit including cars, vans, SUVs, and trucks.

We tried the thicker cover on the driver's side seat first - which is the peeling seat. This is the cover fit for truck seats - and the one with the zipper opening for one of the arm rests. We pulled it over the seat. Meryl opened the zipper to put the arm rest through and the zipper slide broke off in her hand. Well that was not a good sign for this particular choice of cover. We continued to pull the cover over the backrest and then onto the seat. We got the elastic strap under the seat from side to side to secure it. The cover was much too baggy - and was not a close fit at all. That cover came off the seat and packed back in the box to go back to Walmart - with the broken zipper pieces to show the store.

The thinner cover went on next. It slide on a little easier onto the backrest. There is no hole on either side for the arm rests so we had to stop above the arm rests with the sides. We continued to pull the back down as far as the top of the rear seat pocket. We pulled the cover over the seat and there is a small solid bar attached in cloth in the middle of the back of it to push through to the back of the seat where the backrest meets the seat. That pulled the cover that is over the seat nice and tight and fitted.  We put the elastic Velcro strap from each side under the seat toward the rear and attached the two where they met. It took some adjusting to get the cover straight on the seat back.

I had been concerned that the arm rests that are tight against the seat back without a cover would not fold back or fold down. With the seat cover back pulled back on the sides, the arm rests moved easily.

Standing back and looking at the seat the seat back was not well fitting. It was a bit baggy but just about passable. If there were no arm rests to work around and the cover could be pulled down all the way on the sides and back, it would likely fit better. But that is not possible with an arm rest on each side and not losing use of the pocket on the back. I sat on the seat and the cover felt OK.  It was not the best but it would protect the seat - at least if there is more peeling there will be a layer between the person sitting and the surface of the "leather" and there should be less abrasion.

Just to see how the seat and backrest pad would work, we put that on the passenger seat to try. This had two elastic loops on the back to go around the seat and nothing to hold the seat pad in place. As soon as I got in the car to get on the seat the motion of getting on moved the seat pad toward the edge of the seat. Sitting on the seat, any movement moved the pad. This would not do at all!

So - the seat cover that we tried on the driver's seat will be what we stick with - until we find something better - which is unlikely. The Roadtrek seats are not standard seats and are made for Roadtrek or modified seats for Roadtrek. You cannot go to a custom seat cover site that asks for make and model of the seat and put in Roadtrek - they are looking for a car/van year and model - and the stock Chevy 3500 seat is not the same.

Here is what the cover looks like on the seat - 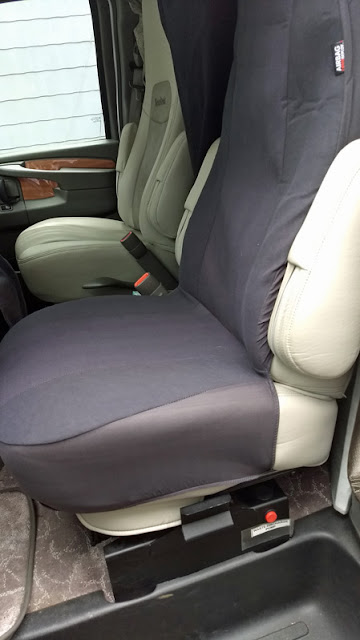 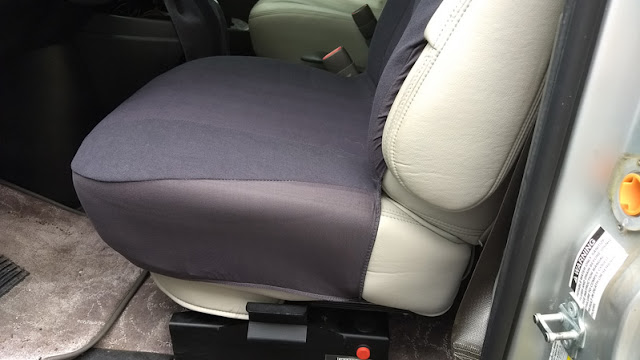 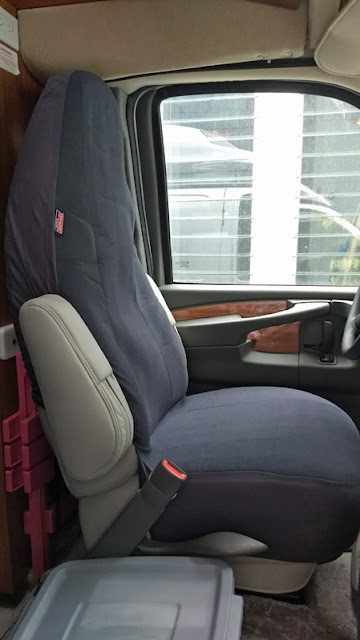 You should find this cover currently at Walmarts in the auto aisles. The brand is Dickies. The writing on the stick on label says "Hudson Grey 3001170LD" and the SKU on the UPC code says "4338801170".

As I say, they are not perfect. They are OK and we will see if they hold up. Our seats are grey. They say the color of this is Hudson Grey - and on the seat it looks black. When I commented this to Meryl she remarked, "Maybe the color is supposed to be the color of the Hudson River." - which is pretty close to what it is.

Roadtrek front seats are pretty much all the same and this should fit, the same way, not only a 190, but also a 210, a 170 and even the Sprinters and the Dodge ProMaster Roadtreks (unless those seats have changed in the newer models).