This article will likely surprise many who read it. I am going to reveal something that many RVers don't realize. RV Antifreeze freezes. Yes, the "pink stuff", the substance you purchase and put into the plumbing of your Roadtrek or any RV to protect the pipes from freezing in the coldest temperatures of winter, freezes. So are you wasting your money? Is this some type of scam? Actually, no it is not a scam and RV antifreeze really does protect your RV plumbing in the winter. The reason is in understanding the difference between RV antifreeze and what is commonly known about vehicle engine antifreeze.

Vehicle antifreeze is made to protect your engine's water cooling system from freezing in the winter and from overheating in the summer. It works by changing the freezing point of the water that it is mixed with and by also raising the boiling temperature of that same water for the hot summer months. Vehicle antifreeze is a highly toxic poison. It is made to be mixed with water when placed into the vehicles radiator.

RV antifreeze is made to replace the water that is in your RV plumbing. It is not made to be mixed with the water. When water freezes it expands. If there is water in a pipe or a valve and it freezes it expands in volume and overwhelms the space it is in and the result is that the ice bursts the pipe or valve. This can happen in any small space where there is water in the RV that will allow no room for the water to expand when it freezes and becomes ice. So, it is important when we winterize our RV to make sure that we remove all of the water and replace that water with RV antifreeze. This means the RV antifreeze has to go into the pipes, the valves, and the traps. It can go into the water tanks - fresh and/or waste tanks but as long as those tanks are empty - no water - they can be left empty because of their size. If a small amount of water were left behind in a water tank and it froze, there is so much room for expansion in the tank that it is not likely to do any damage at all. RV antifreeze is non-toxic and is safe for placing into drinking water systems. Now, I would not want to drink any of it, but what might remain in the pipes after flushing them out will not harm anyone, but I am told it does have a taste that many find unpleasant. This is why we flush our fresh water and hot water tanks several times when we dewinterize before using the water in our RV to drink.RV antifreeze is not to be mixed with water - it plainly states this on the bottle. It is to be used straight as it comes from the bottle.

But wait - I just told you that RV antifreeze freezes. The bottle of RV antifreeze says it protects to -50 degrees F! So if it freezes and it is in those small pipes and valves, how does it protect them in the winter? IT DOES NOT EXPAND WHEN FROZEN! 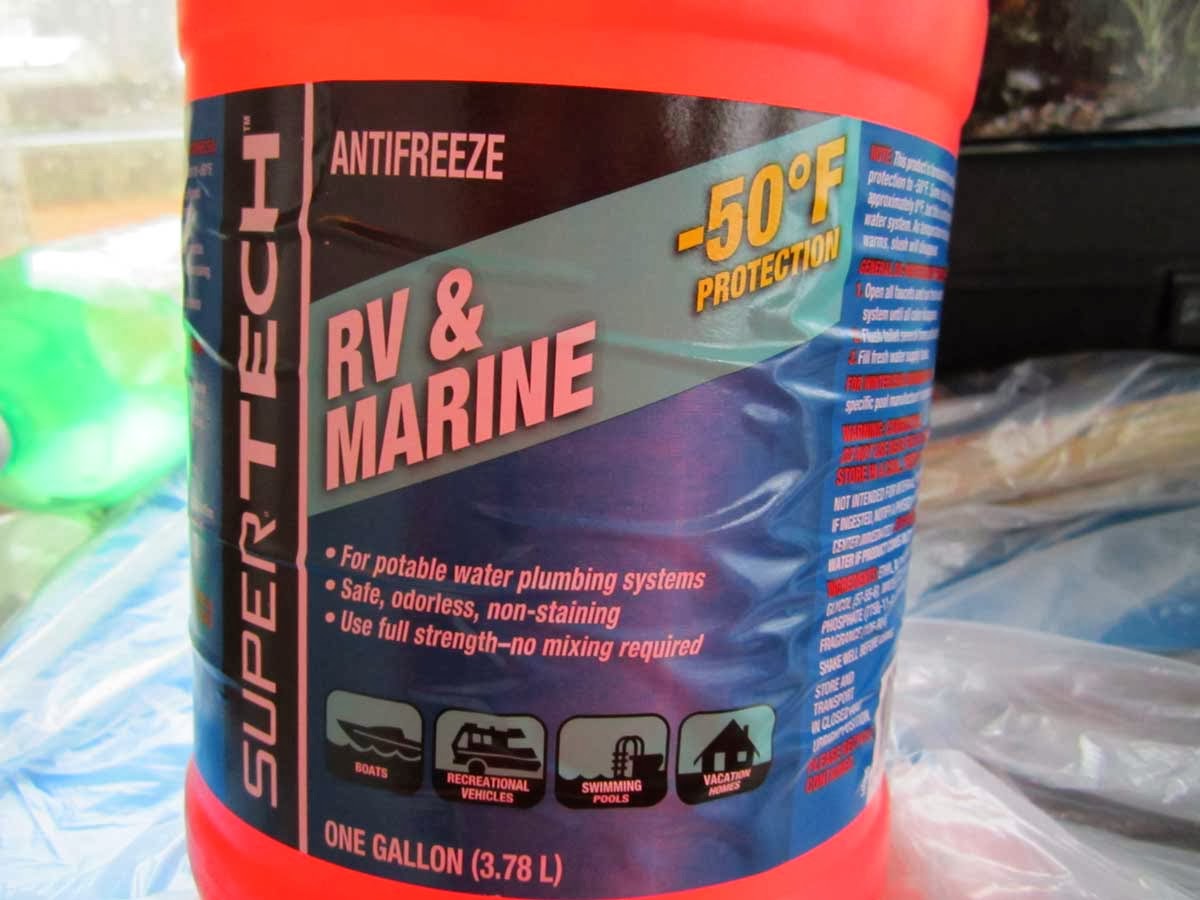 I read about this on several seemingly reliable sources. It has been stated that RV antifreeze will freeze below + 10 degrees F. This has been discussed in RV forums and on Roadtrek forums. There is always a question - does it really freeze?  I decided that I would find out for myself and I did an experiment - with Meryl's permission to use her freezer.  We recently came through a deeply cold week of temperatures below zero. I wanted to know for myself that while the Roadtrek was out on my driveway with its plumbing full of antifreeze it was not damaged. It is too late to do anything about that now, but why worry until the Spring. Here are the results of my experiment.

I started with approximately three ounces of straight out of the bottle antifreeze. A regular bathroom paper cup is three ounces. 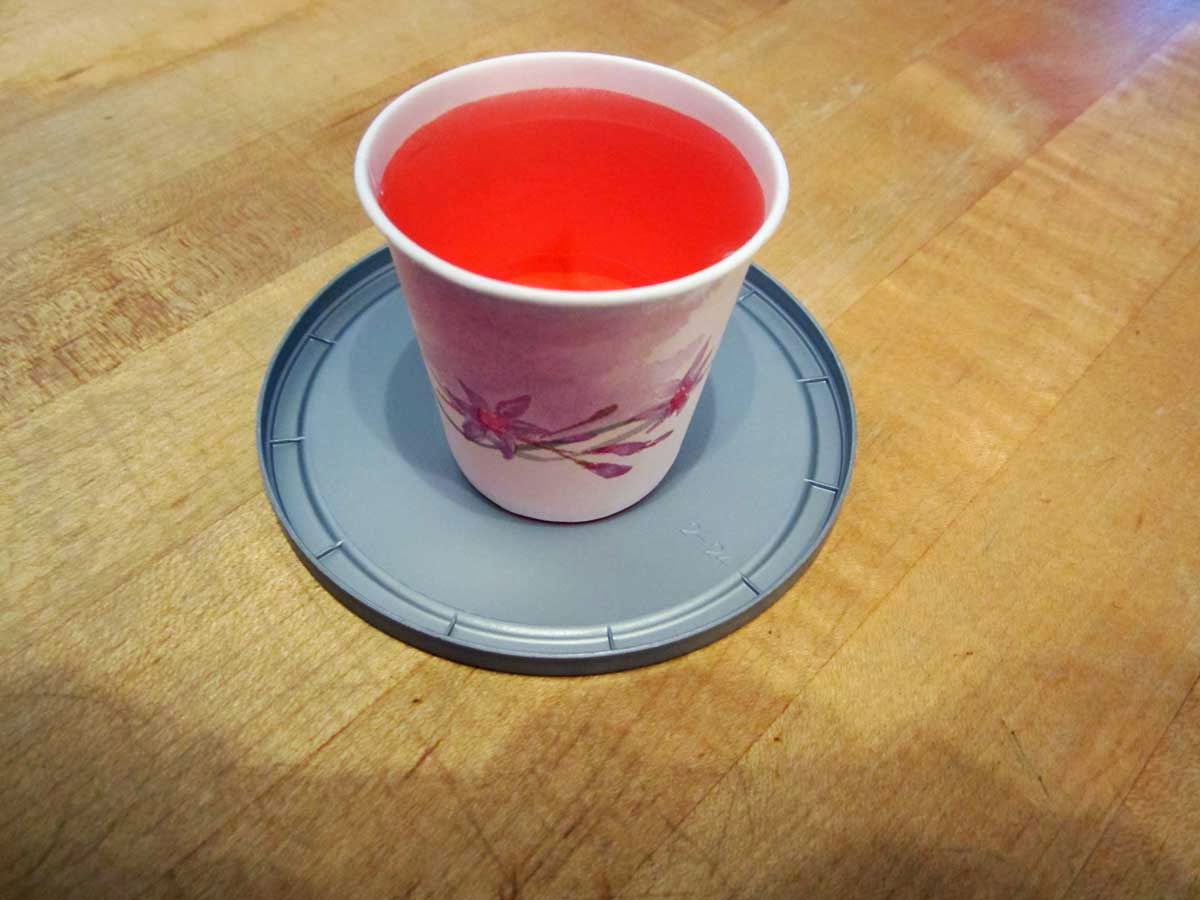 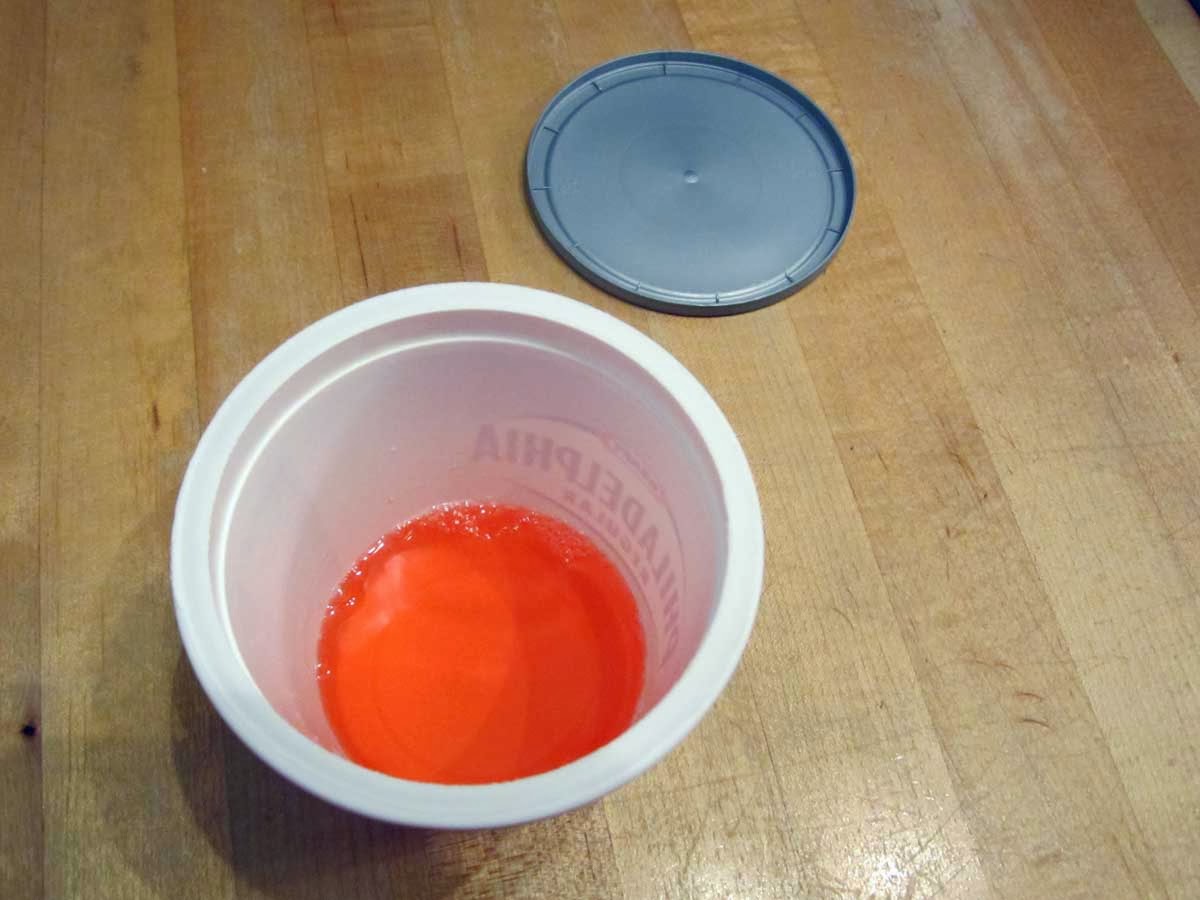 This container was then put into our stand alone food freezer with the cover on the container. The temperature inside the freezer on the shelf next to where the container was placed read Minus 10 (-10) degrees F. That certainly would simulate the cold weather that recently has spread across much of the US and Canada. The freezer door was closed and the antifreeze in the container would be checked several times over the next 24 hours. 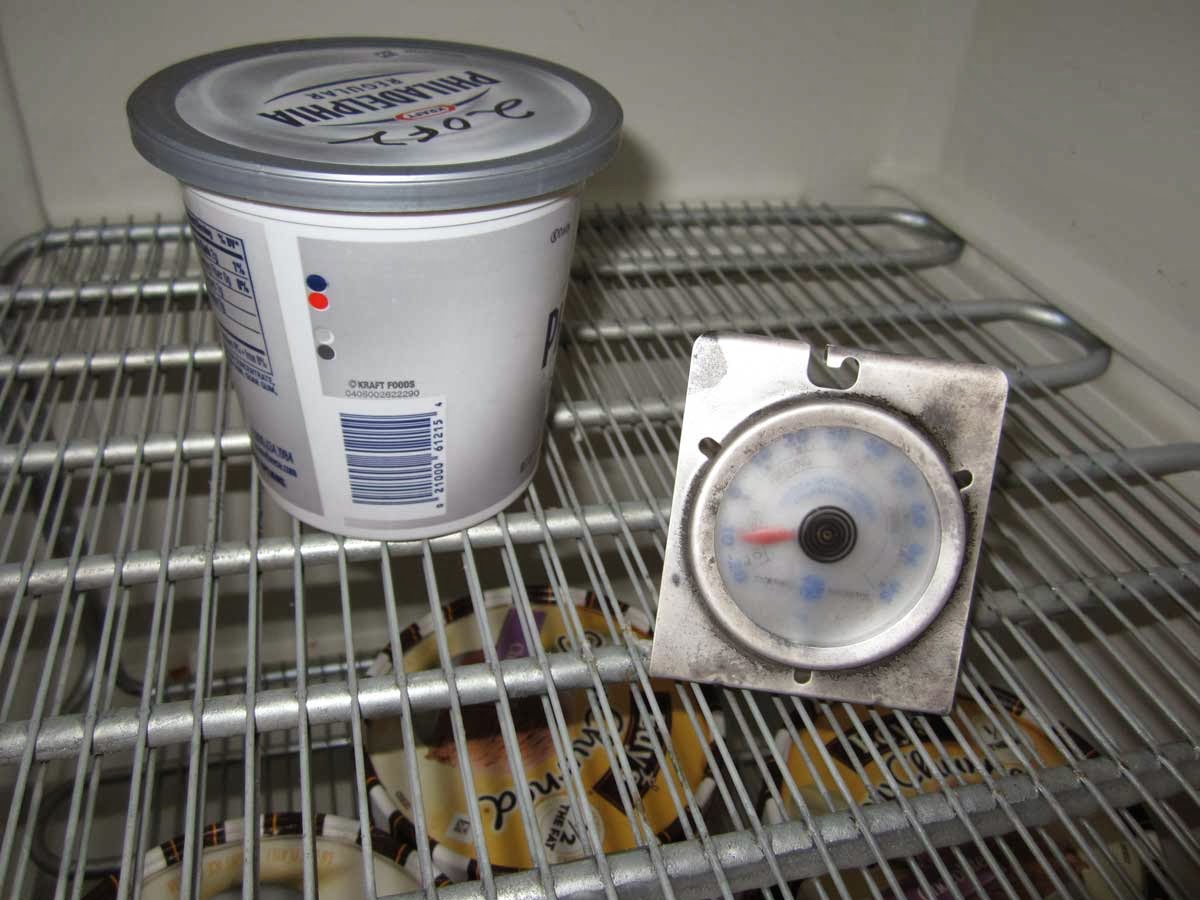 The first check was in five (5 hours) 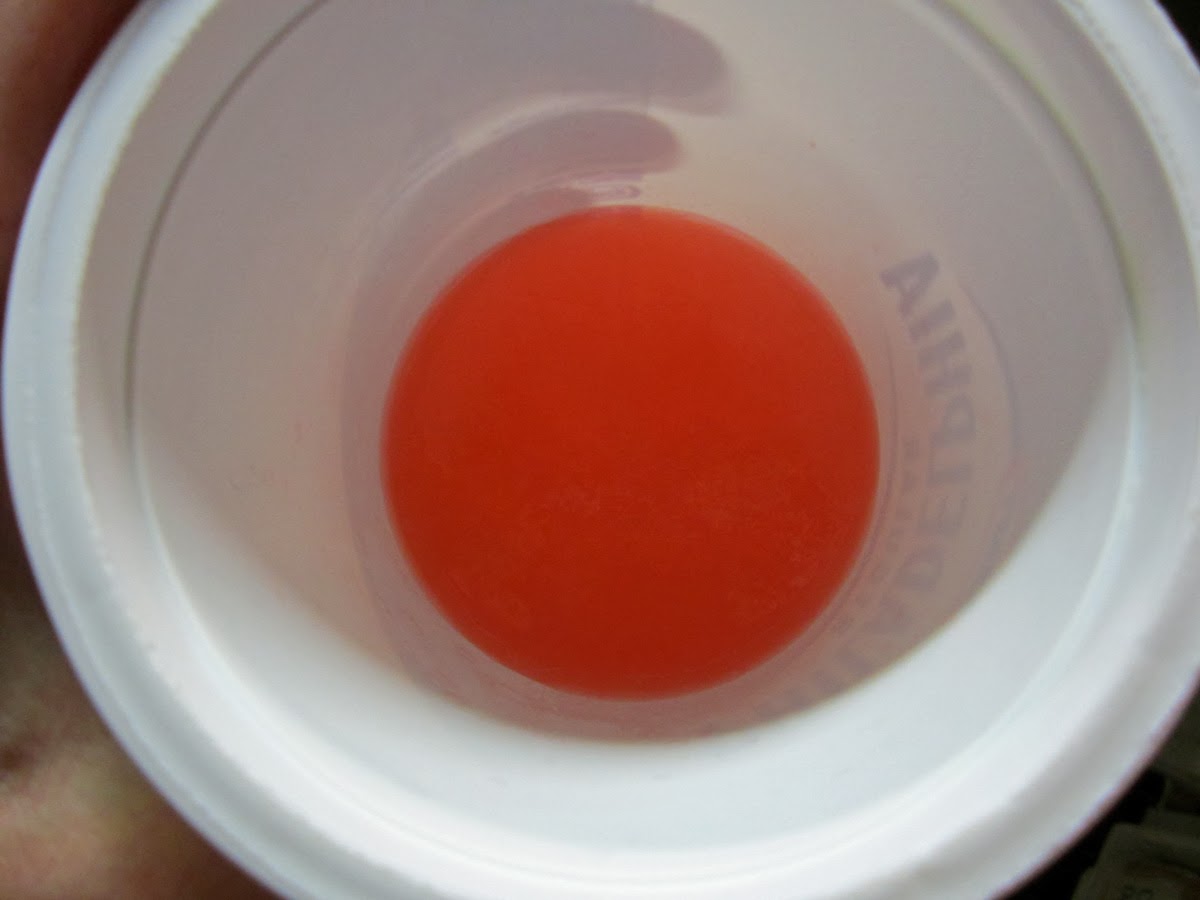 The antifreeze had turned to the consistency of ice cream. It was not slushy like the frozen carbonated drinks, but semi-solid. 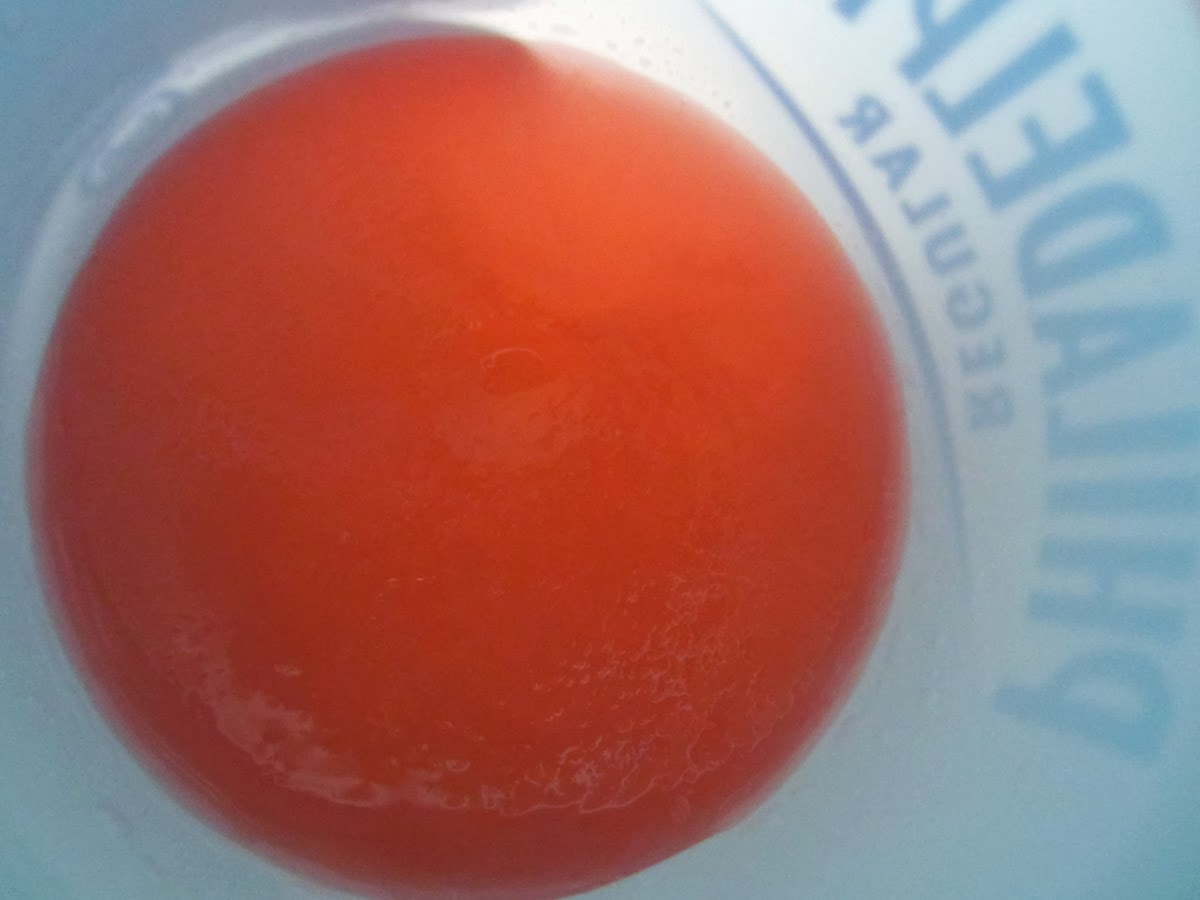 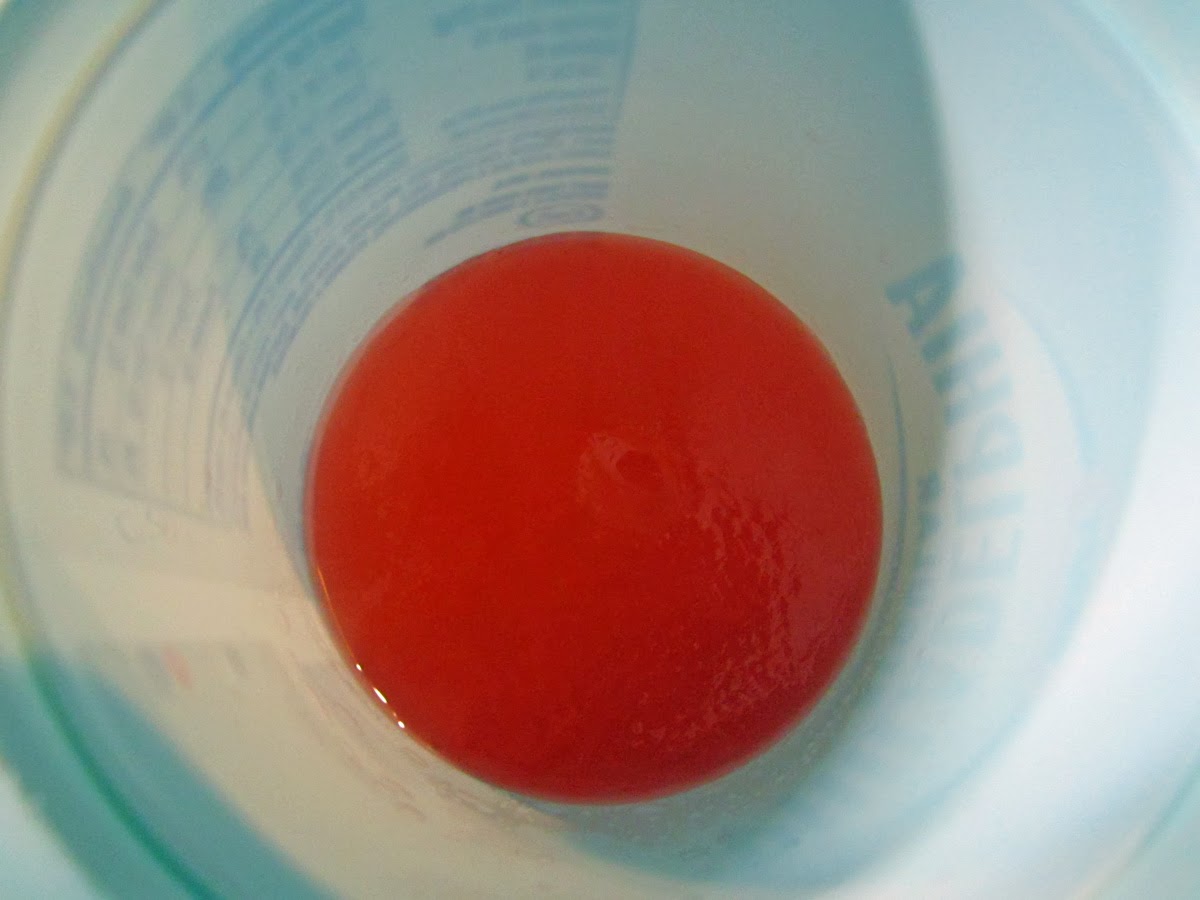 I tried pushing my finger into it and my finger left an impression (hard to see in the photo near the center at about 2 o'clock) but did not push through. There was resistance from the frozen RV antifreeze preventing my finger from going through.

The next check was in 12 hours. 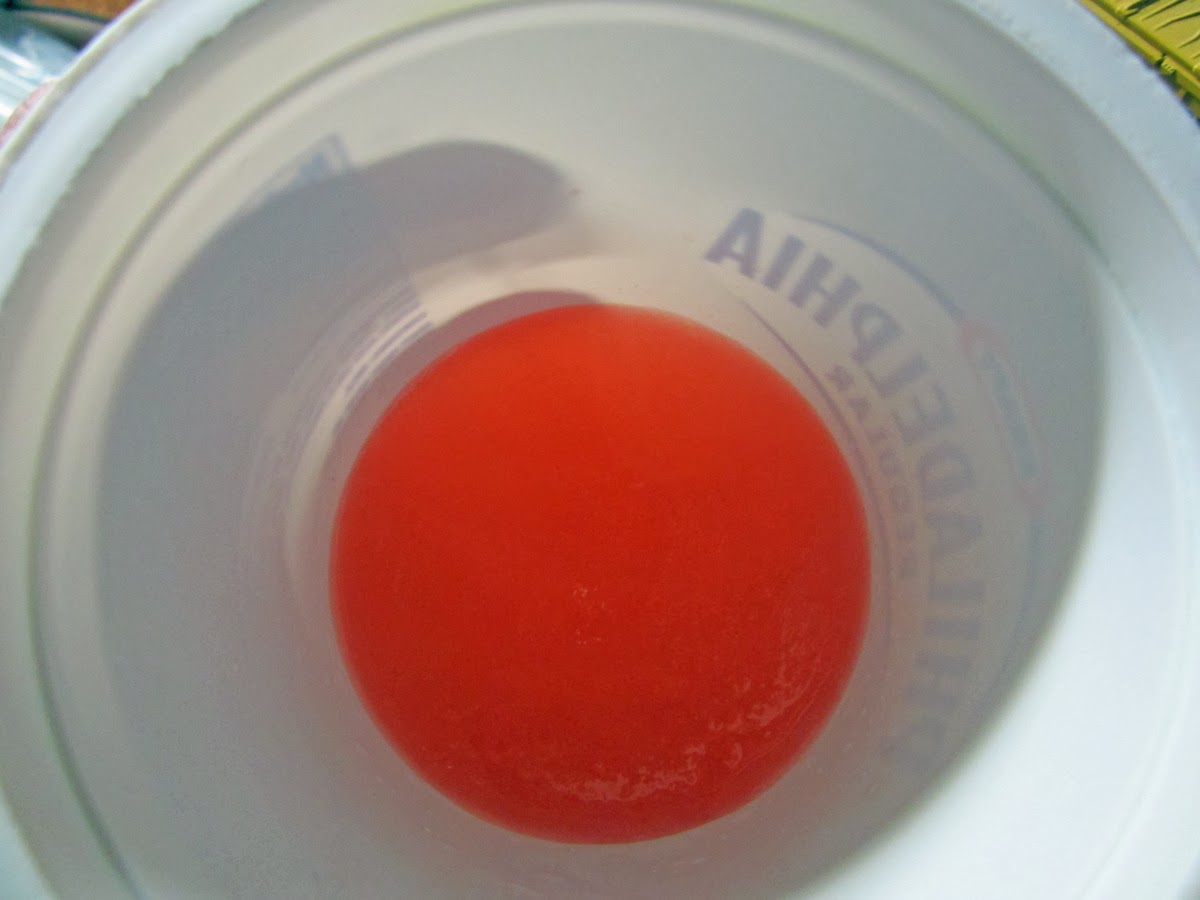 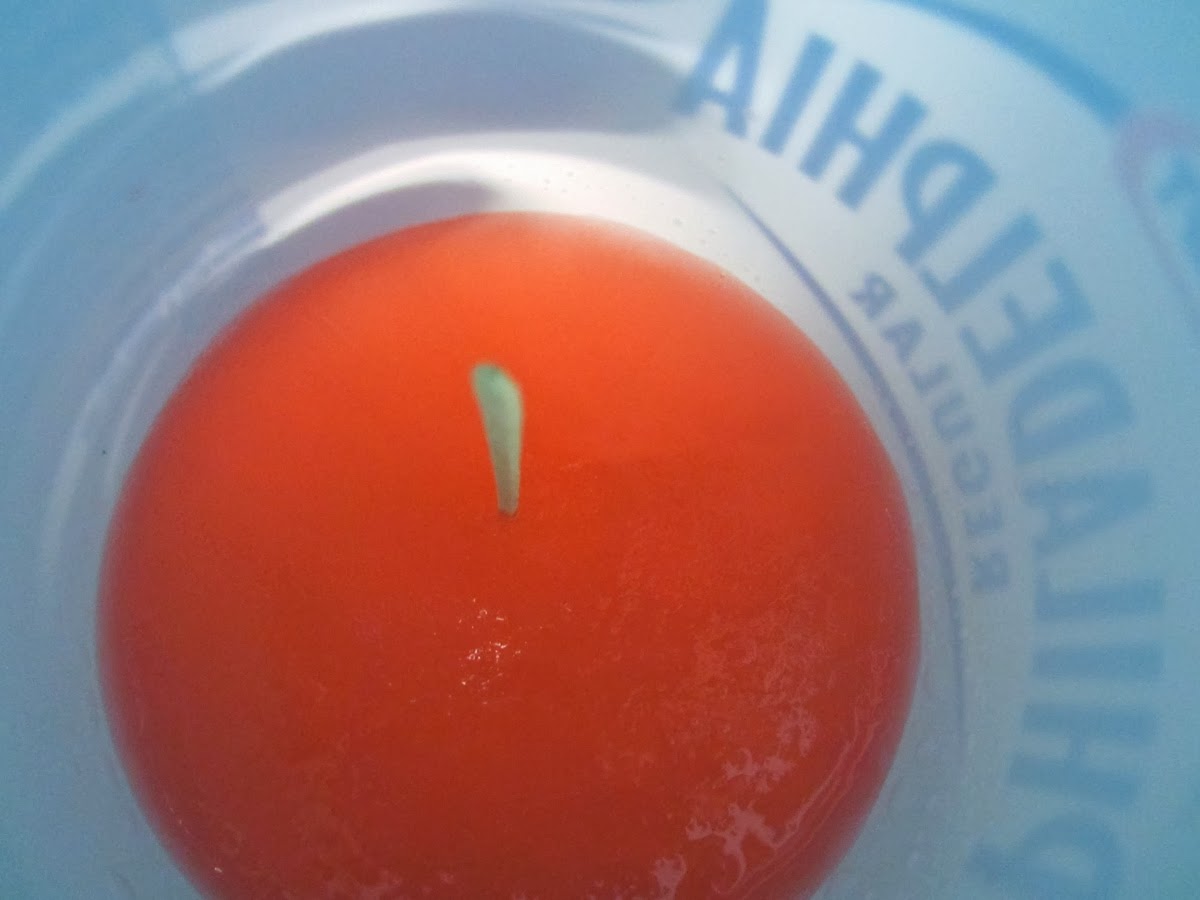 The RV antifreeze at 12 hours was the consistency of Italian ices (the confection). I took a toothpick and pushed it into the surface and the toothpick went down into the ice no more than about a half inch.

The next and final check of this stage of the experiment was in 24 hours. I could have ended the experiment here and had all the results that are needed, but I wanted to go one step further. There have been some recommendations - including by Roadtrek in their manuals - that in the winter one can mix a 50/50 water/RV antifreeze mixture and put that in the fresh water tank or directly into the toilet to flush the toilet. I wanted to see what would happen if the experiment was repeated using 50% water and 50% RV antifreeze mixed together. This would be the same as what is being said to put into the tanks which will go into the plumbing that can get very cold in very cold outside temperatures. What would happen? I wanted to find out for myself.

I let the RV antifreeze in the container melt and return to room temperature. I then took approximately three ounces of plain water (measured in the same paper cup) and added that to the container with the RV antifreeze. I mixed the two together, marked the level of the mix on the outside of the container, and put the container back into the freezer where the thermoeter was still reading minus 10 degrees F. Again, I would check over 24 hours. 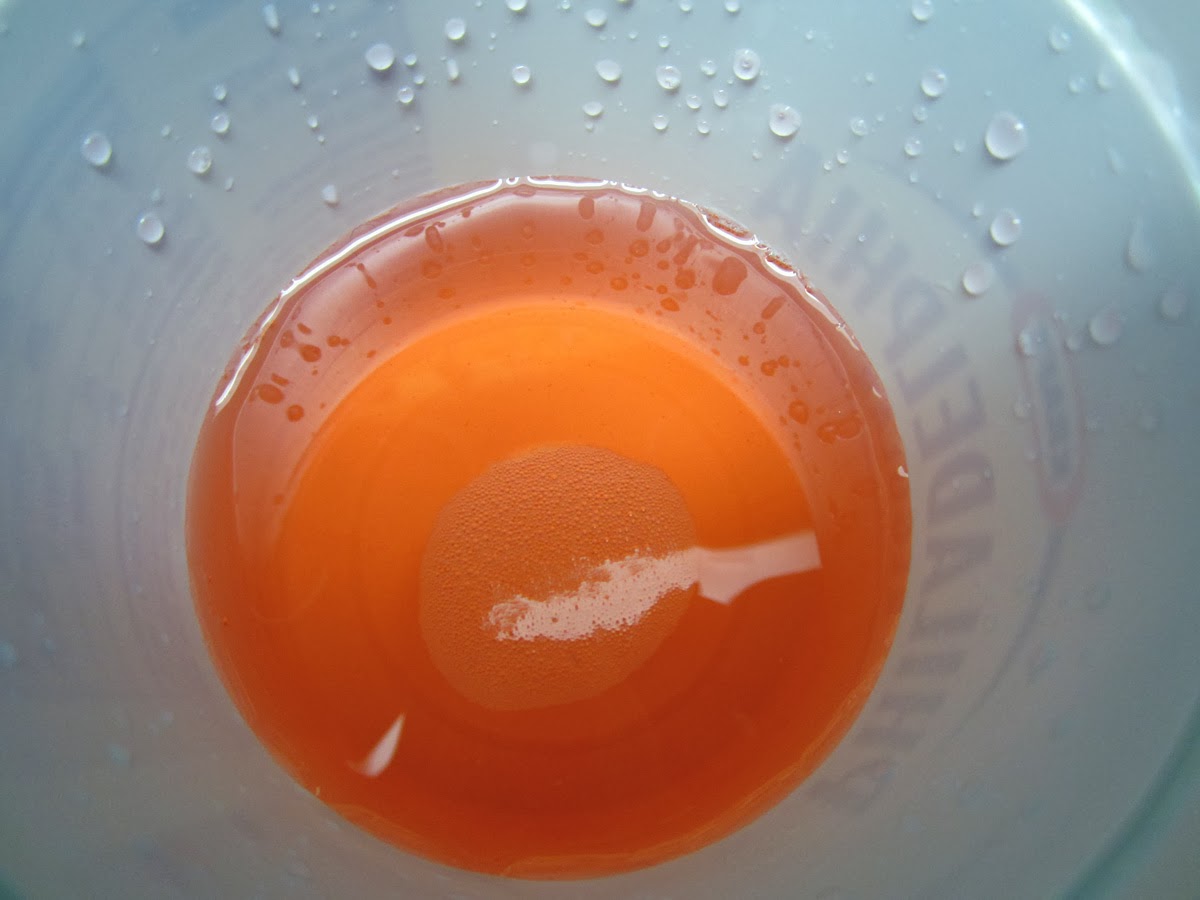 First check of water and RV antifreeze at 2 hours. 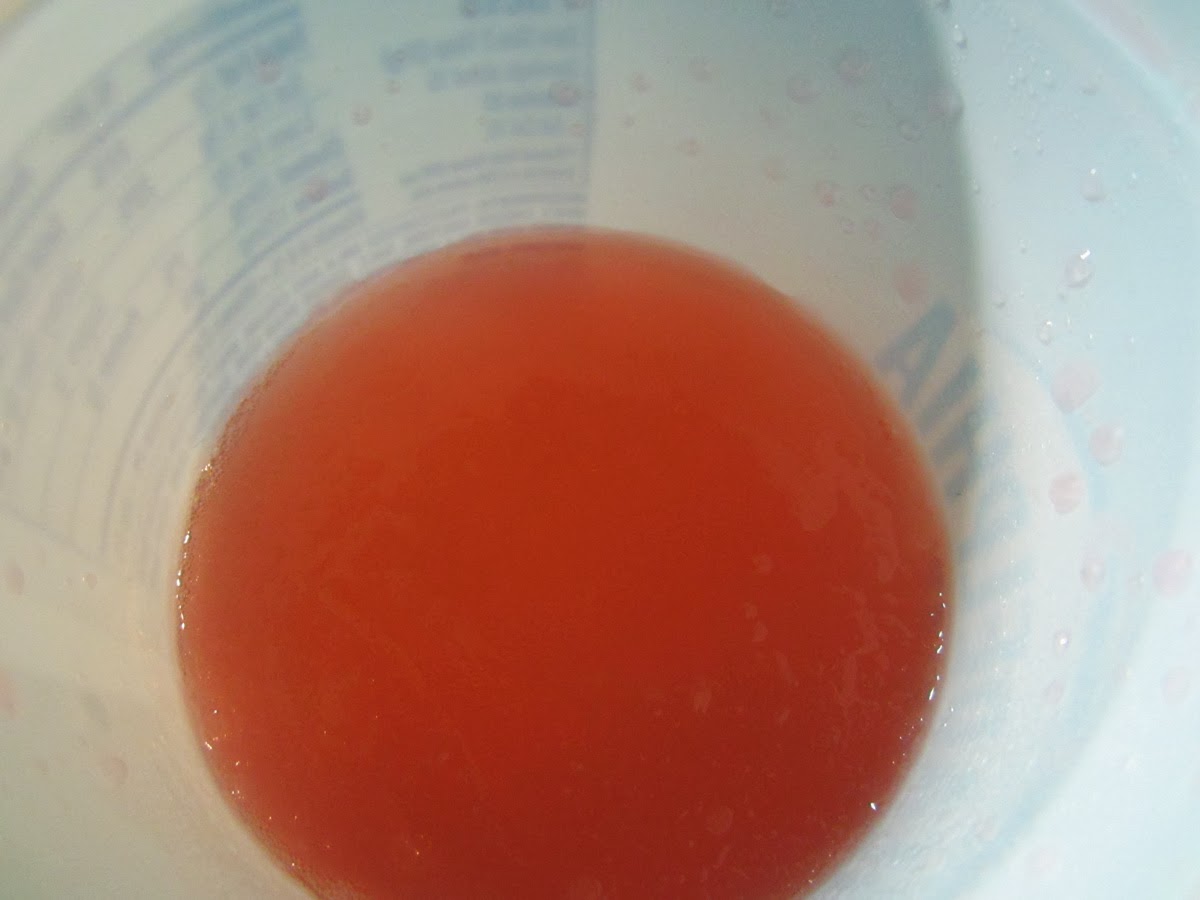 I could not push the toothpick into the frozen mixture and this was just at two hours. Looking at the mark on the outside of the container, the mixture had expanded up over the mark to almost 1/4" inch higher than the mark. The mixture EXPANDED. This would do damage if in a pipe or valve at this temperature.

The next check of the mixture was at 5 hours.

The mixture is solid. It still has a grainy surface. The expansion level is about the same as it was at 5 hours. I could not put my finger into the mixture at all. The toothpick would not go in.

The next check was at 11 hours. 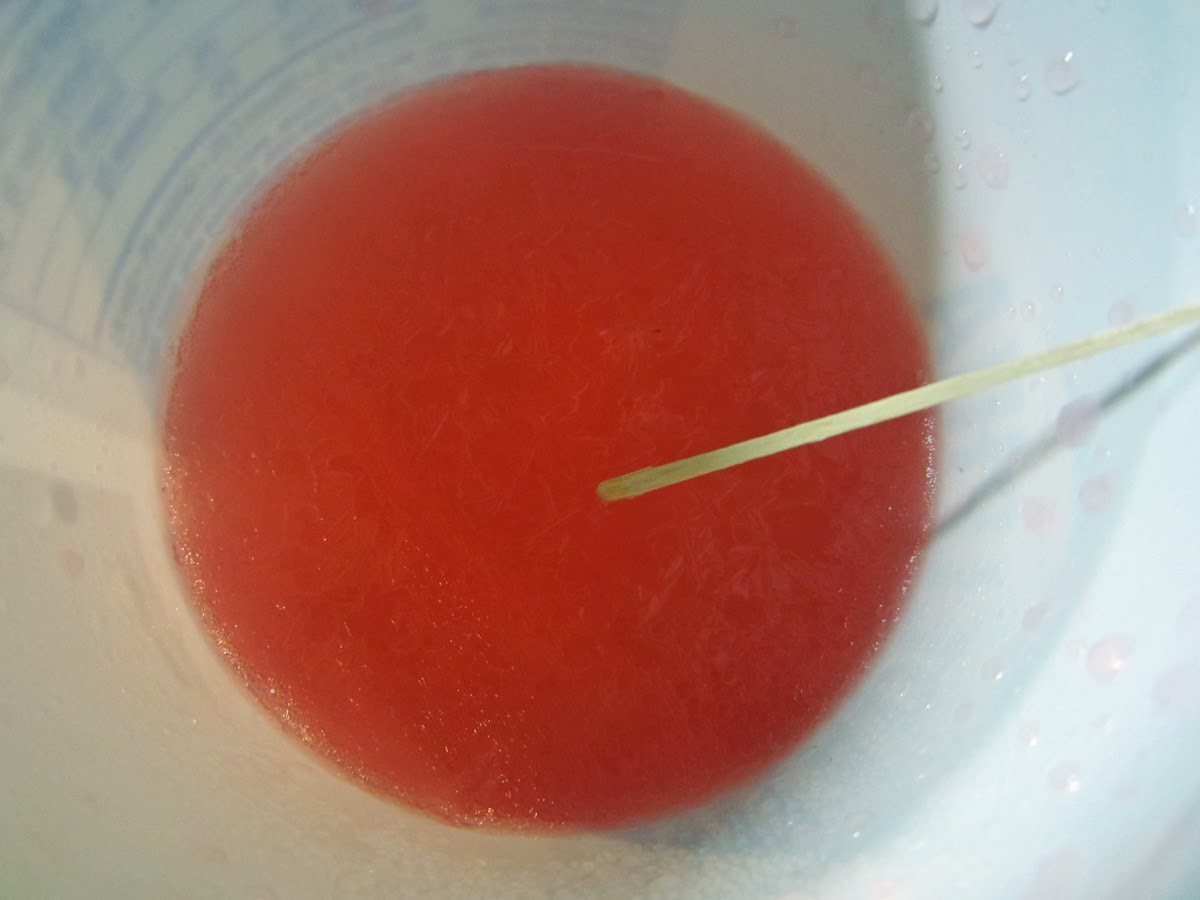 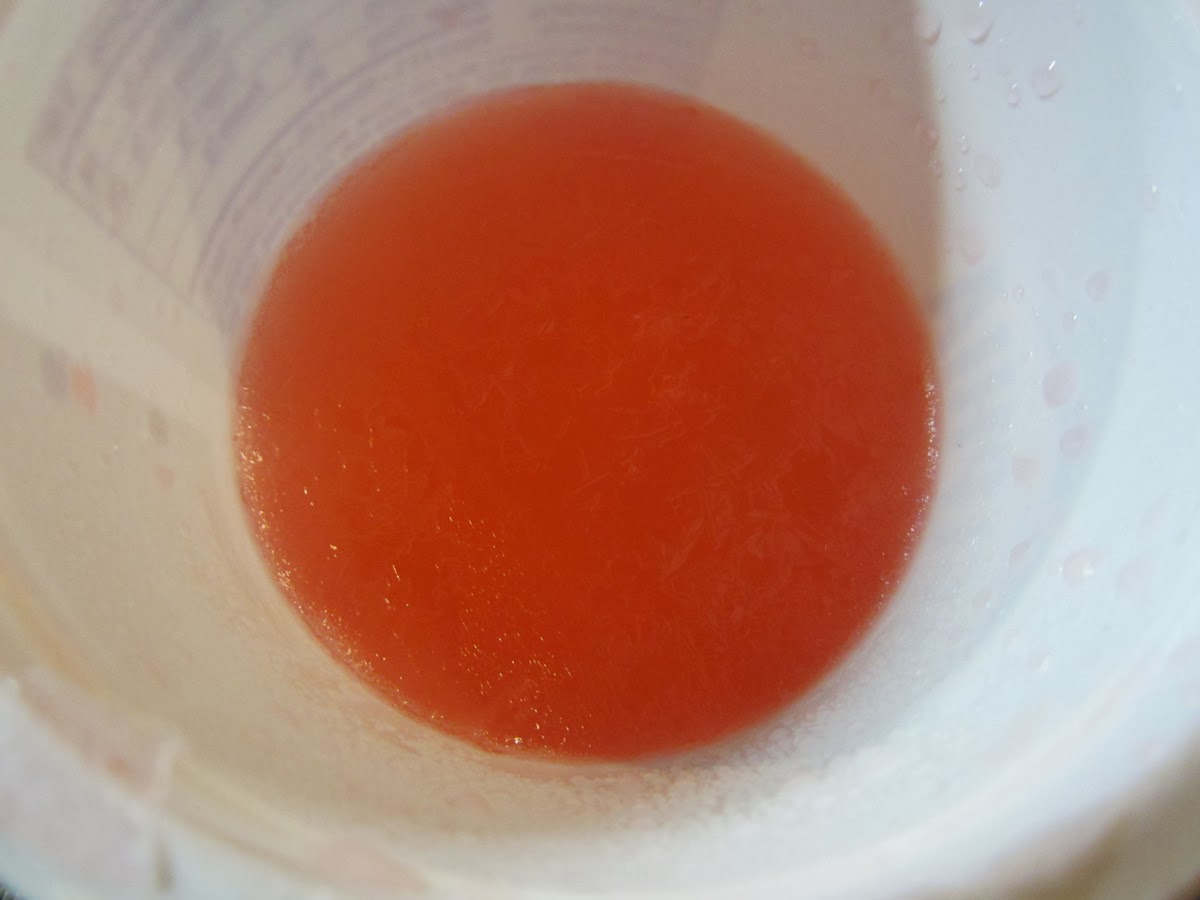 The mixture was solid ice. You can see in this photo that the toothpick just sits on top of the ice. The level of the mixture raised slightly more meaning more expansion.

The last and final check was at 24 hours. 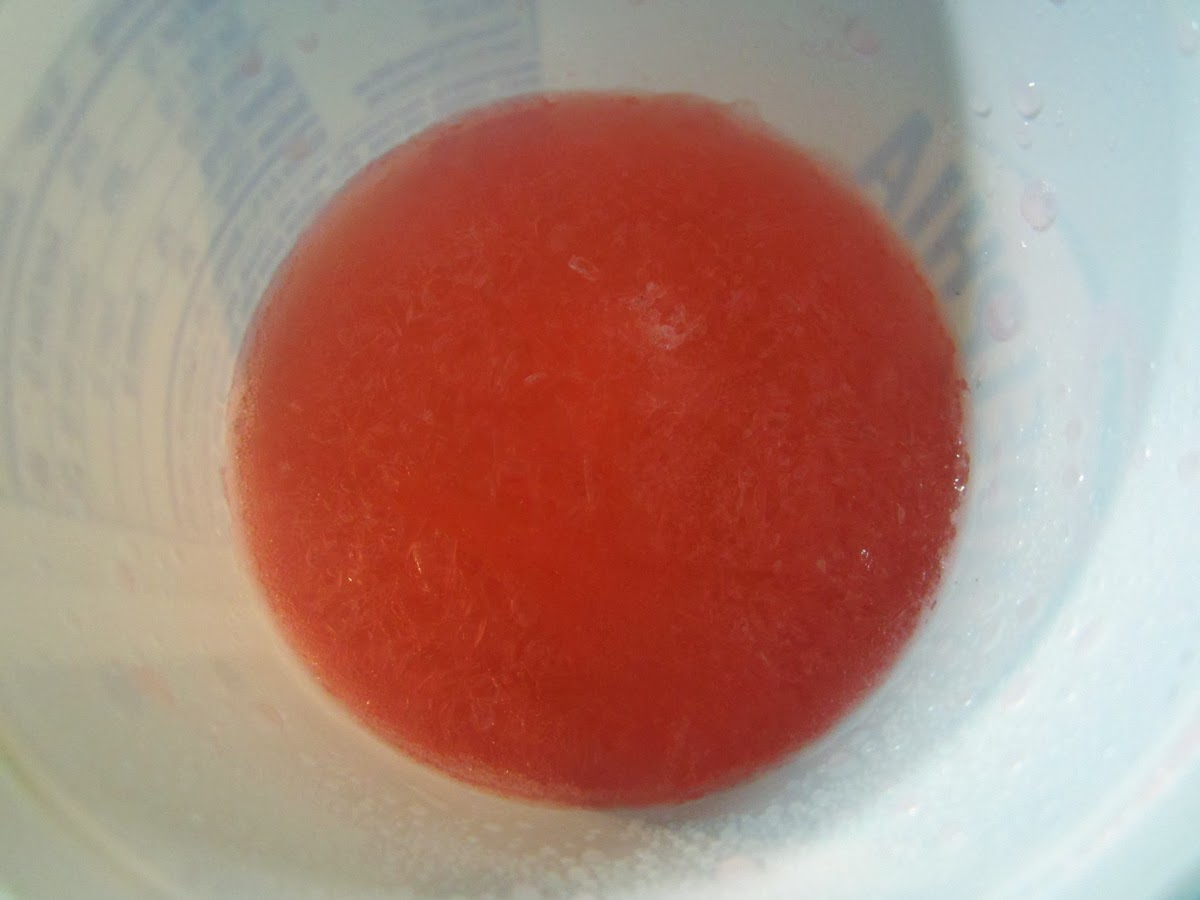 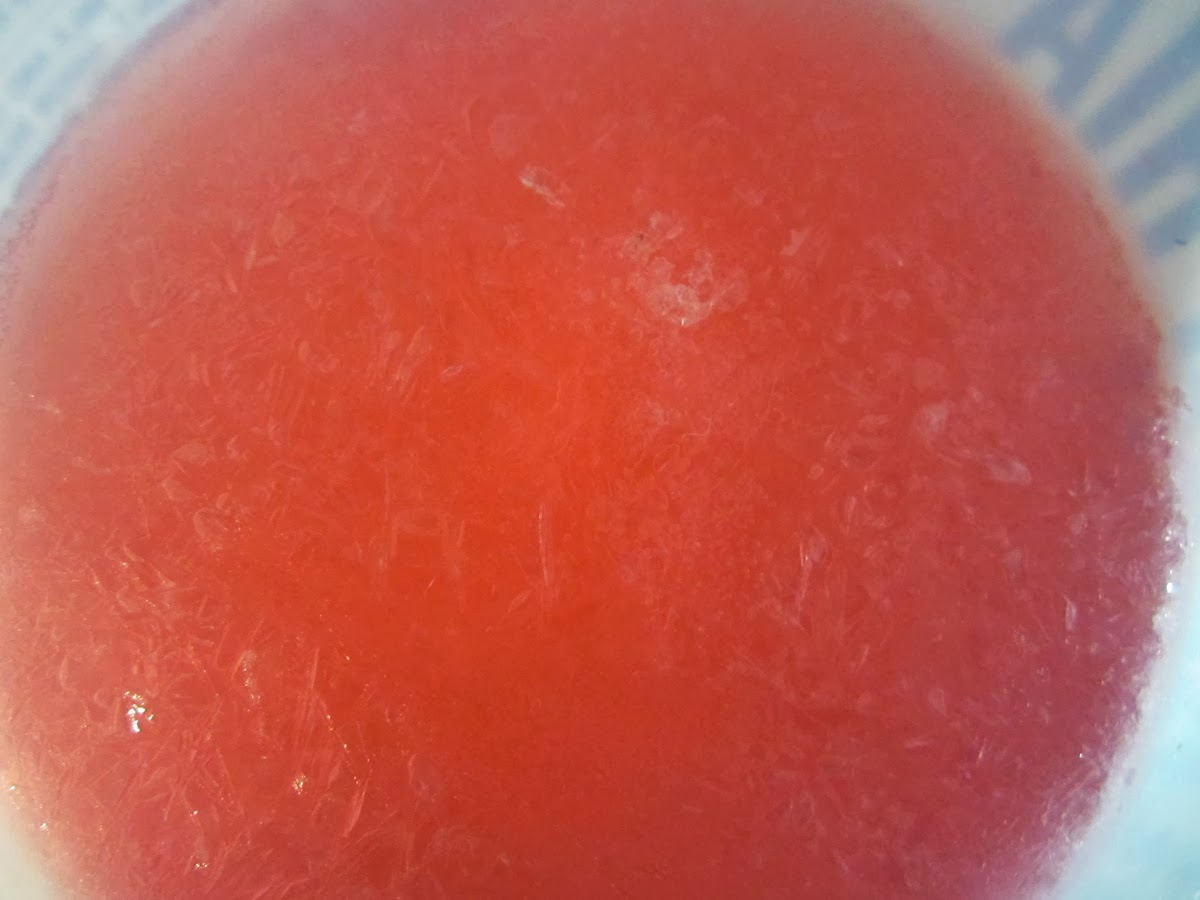 This is solid ice. You can see the tiny cracks in the surface. You can see a small chip in the ice showing as white on the lower left of the photo just above. 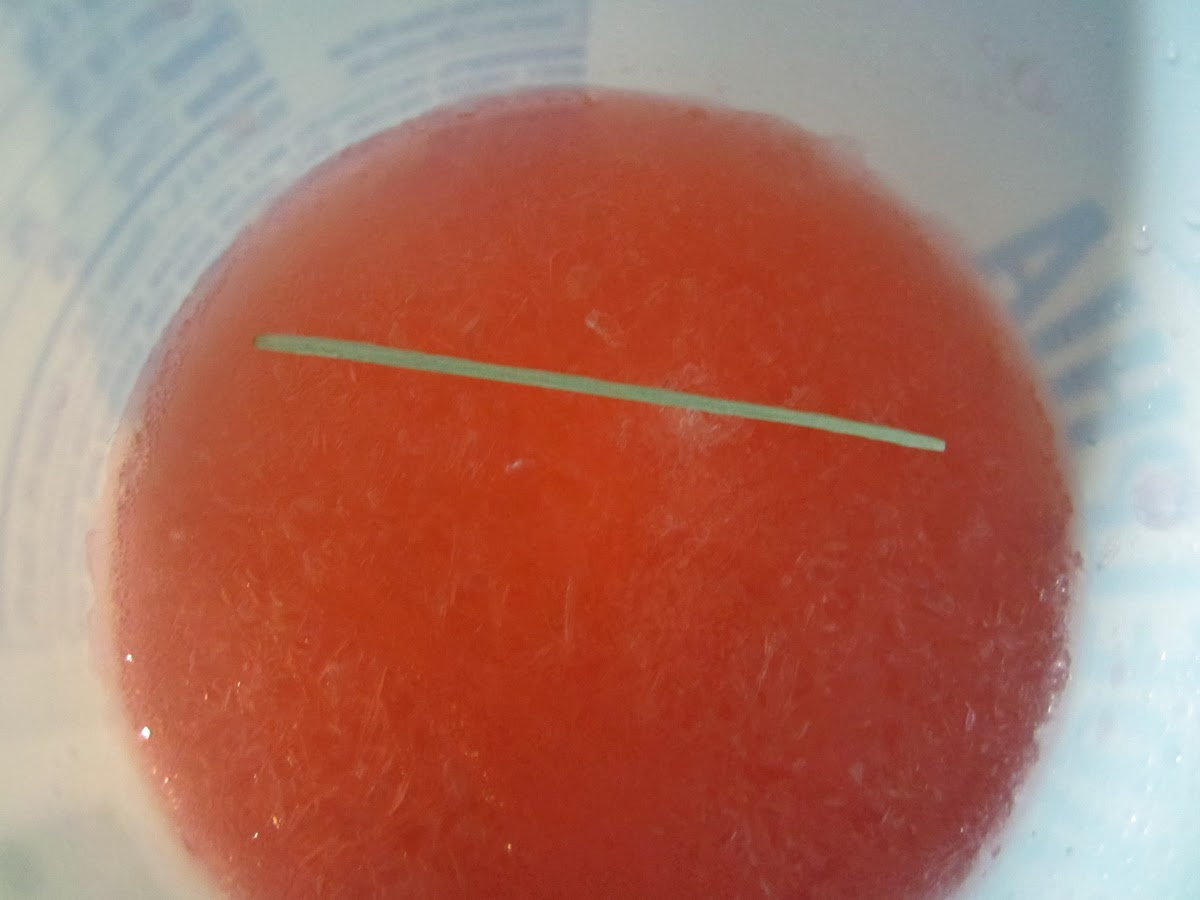 The toothpick can only lie on top of the ice. It would not go through at all. When I looked at the level of the ice compared to where the liquid mixture started it measured 3/8" higher than than the mark. The frozen mixture expanded up 3/8"!  A mixture of 50/50 water and RV antifreeze will expand and that is just what you are looking NOT to happen. There is no way that I would ever mix RV antifreeze and water and use it to protect anything! I do not understand why such a thing would be recommended by anyone. Water alone expands 9 to 10% according to physicists. This seemed to expand about the same as plain water. Bad, bad, bad!

So what is learned from all of this - use RV antifreeze straight out of the bottle. When you winterize you are pushing whatever water is remaining in the pipes and valves out with the antifreeze as it is run through the pipe and through the faucet and toilet valves. When you are done all that is left is RV antifreeze in those places. Do not mix RV antifreeze with water and think that you are protected. You are not. If you are winter camping and want to use RV antifreeze to flush your toilet, only use straight out of the bottle RV antifreeze and never come close to filling your black tank in the process - make sure to dump before the tank is even close to full and then if you have a macerator, run antifreeze into the empty waste tank and then into the macerator to keep that protected between uses.  Of course, gambling is a big industry and a lot of people like to gamble. If you want to gamble like this the odds are definitely against you.