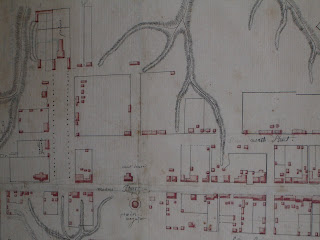 an Revolutionary War. What you are seeing ranges from the period of 1763 to about 1781. These are not a collection of buildings that existed at some other location and were moved here to be a museum. Every building that you see stood on the exact spot as you see it. The archaeologists of Colonial Williamsburg dug until they found the original foundations of the buildings and houses that were no longer standing and the built on those same brick foundations to reconstruct the building. They used journals and descriptions written at the time. They found engravings of buildings done in the Period. They also had a map that was drawn by a French soldier who was in Williamsburg in 1781 that shows every building in its place. You can follow this map today and what you will see will match what the Frenchman drew over 230 years ago.

My favorite time to walk through Williamsburg is late at night. The tourists have left for the day and the sounds that you hear are from the crickets in the trees. The sky is so clear that you can see thousands of stars bright and shining. This may be common to many who live out in the country away from the bright lights of cities but I don't get to see a sky like this when I am not in Williamsburg. There is a peacefulness that sweeps me back to the past.

The main street through the historic area is Duke of Gloucester Street, called DOG street by the locals and employees. The street is one mile long from the gate of the Colonial Capitol building to the gate of William and Mary College at the opposite end. Along this street and the two streets that run parallel on each side and along the side streets that connect the three is the historic area, and this is where most of the restoration sits. During the day, depending on the time of the year that you are there the 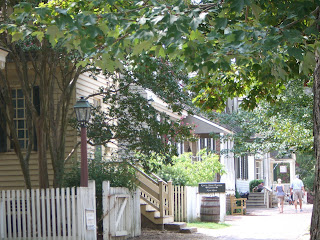 street is bustling with visitors. The restoration is open all year and the highlight of the year is during Christmas time when all of the buildings are decorated for Christmas as the colonists did (no, no electric lights or Christmas trees). This lasts from the first full weekend in December to after Christmas. On that first weekend is Grand Illumination, but you are going to have to wait hear about that until I get there again this December with my Roadtrek.

As you walk along the street you may (with an admission pass) go into buildings that open. Some are trades shops and you will see blacksmiths working, gunsmiths working, silversmiths working, milliners making gowns, tailors making suits, weavers weaving and dyeing, carpenters building, brick makers forming bricks out of clay mud, woodworkers making furniture, and much more. Some of the buildings are the homes of the wealthy and some are homes of the master tradesmen. You will also go into the Capitol Building, the Governors Palace where the Royal Governor lived, the Court House, the Public Hospital for the Insane, the Magazine where weapons were stored, and more. There are also the Taverns that were the hotels and motels/restaurants/bars of the 18th Century. It is in the taverns that men met each night to discuss the politics of the day and when you come to Colonial Williamsburg you will learn that some of these taverns played a very important part in the founding of our nation.

If it existed in the city then, it is here now on the original site. The only exception to this is found on a walking path between the Visitors Center and the Historic Area. There you will see Great Hopes Plantation. This has been constructed to show how the common people lived in the 18th Century. Log houses with dirt or wood floors were far more common than the elite mansions of the wealthy. This is a working farm and you can participate in some of the daily chores.

The most recent building to be restored is Carlton's Coffeehouse and this has been a long time coming and much anticipated. It was completed about a year ago. As I could 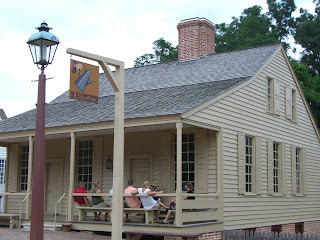 not travel, I watched the reconstruction of the building on one of Colonial Williamsburg's webcams. There are six of them. Here is a link. A coffee house was different than a tavern and until tea was boycotted it was a place to go to drink tea, coffee, and chocolate. A meal could be had with special arrangement as well. After 1774 the tea was gone and the drinks of the day were coffee and chocolate. Chocolate was not eaten as a candy but made into a thick, spiced drink. Carltons now serves a free sample during its tours. I must say that it was very different. It consists of chocolate ground to a paste from the beans, cinnamon, nutmeg, and cayenne pepper. It was not sweet like today's hot chocolate. It was thick and the flavor took a little getting used to but once I tried it, I wanted more.

On the edge of the Historic Area is the Public Hospital for the Insane. The cleverly designed interior of the building shows you the history of the hospital from the 18th Century into the 19th Century when it burned to the ground, and below ground level, is the Dewitt-Wallace Gallery and the Abby Aldridge Rockefeller Folk Art Museum. There you will see Colonial Williamsburg collection of original furniture, clothing, textiles, ceramics, silver glassware, guns, and more. Abby Aldridge Rockefeller, the wife of John D. Rockefeller, collected American folk art. Her collection is housed in a wing of this building. This building alone can take the better part of a day to go through. In the summer it is a great place to escape from the Virginia heat that can reach over 100 degrees. (A note on the heat - to preserve the antiques and the buildings themselves, most of the restored and reconstructed buildings are air conditioned, though you will not see an air conditioner.)

It is impossible to see Colonial Williamsburg in one day. Plan for four days. Allow yourself to leave the rush of the 21st Century and travel back in time to a place and time that was just as busy - and a little dangerous with a war looming ahead - but certainly nothing like your everyday life. And each time that you go something will be a little different. Research and archaeology is going on all of the time and things are changed to reflect new discoveries of the past. If you like history, Colonial Williamsburg is a Must See! 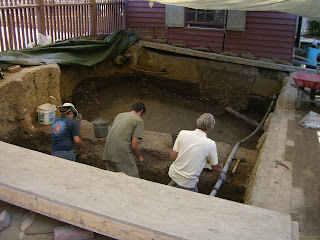 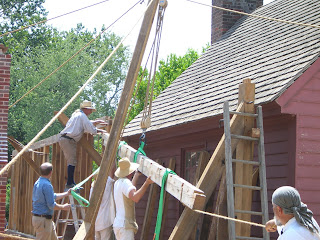